I have spent the last couple of evenings trying to wrap my head around the structure of the book. Getting stuck in how it should be set up instead of the content. I am slowly wrapping my head around it again and I spent tonight writing more than 400 words about how to use sticky notes correctly. The hardest part of writing this text was to write sticky notes instead of post-its. 🙂 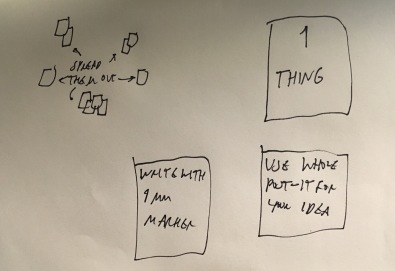 How to use sticky notes
One thing I have realized after facilitating a lot workshops is that most people don’t know how to use sticky notes. I see people write many ideas on one note, write with small letters in one corner of the post-its, and then they put up the notes in straight rows and columns on the wall. When you do these things, you miss the whole point of using sticky notes.

I have started to become more and more precise in how you use them and I have now developed a five-minute sticky note-course that I now give to new groups. People usually laugh when I say that we are starting with a sticky note course. But I usually get people’s attention after I show them how to pull off a sticky note correctly, so they don’t stick out and instead lies flat against the wall. I’m not sure how to convey this in a right way in writing, but I will try. Instead of just pulling the note straight up and bending it, you pull parallel to the rest of the notes so that they bend and your sticky note come off. That was a short version if you want the longer version then you have to give me a call.

There are three essential parts when writing sticky notes that everyone should know:

When you then ask the groups to present and post their sticky notes on the wall then ask them to have some distance between the notes. If another person has a similar note, then you want them to be able to put them close together. And after everything is on the wall then you want space to be able to move the sticky notes around and group them in different ways.